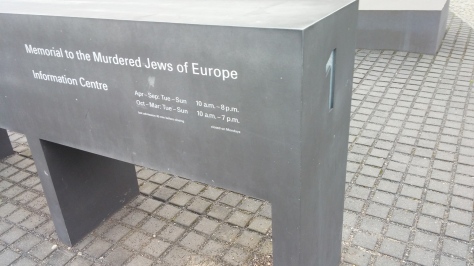 While in Berlin recently, I had occasion to visit the “Memorial to the Murdered Jews of Europe and Information Centre.” Initiated by Leah Rosh and Eberhard Jäckel, this work was designed and built as the “Holocaust memorial for Germany.” It is composed of a series of stelae of varying heights on a field of hills, with the consequence being that you do not know from afar whether a seemingly tall stele is near or far from the ground.

It is hard to describe the feel of the monument. At the edge of it, people mill about, sitting on stelae eating snacks, visiting, arguing, and doing all the things people do in a park. But as soon as someone stands on one of the stelae, a security guard summons them down again.

Eventually I made my way to the middle of the field. Here, the columns were quite tall. People who were laughing and joking on the edges became a bit more taciturn here. It was a bit eerie, but even more off-setting was hearing the crying of children who invariably became disconnected from their parents. One child had crashed into a corner of one of the stelae and was inconsolable. Knowing the occasion for the memorial simply set me on edge.

Underground, beneath the memorial, is an information centre, which requires a security check. No one said a word after making it through the checkpoint, reading bits of history, fragments from letters, stories of families etc. The material was not unknown to me but I read it a bit differently after wandering through the stelae. It seems that the field set me askew, so that facts I knew before bore a new and more ponderous weight.

To say that the memorial is “effective” is to do it a grand disservice. Such language seems too utilitarian, and presumes a goal that is achieved: an item to be checked off of the “to do” list. No, this memorial is not done. It is still churning in me: stelae talking to my soul and silence waking me. I will be sitting with this one for a time, mindful that some lessons are not meant only to be learned but but to be lived resolutely – day in and day out.

3 thoughts on “A Memorial Field”