They fall asleep so swiftly,
these animals closer to Genesis
than me and my kind. They
dream of the Lord God
walking their wood,
until then again they
flinch from the pain of
the primal couple stepping
out of the garden and into
their nightmare.

Is there any hope for Your
creatures? To surface from
sleep to discover a sliver
of sanity seeping into this
Homo Sapiens?

These pets sleep –
domesticated by our
regimes, our
treats, our
house training but
every now and then
the wild comes calling
and I sense some
hope for
us all.

This place feels strange, but
still, when I touch the
earth I feel home: this
red soil God bleeding
Adam, this crisp air God
spiriting Eve. The primal
pair is everywhere with
their progeny in tow.
Here I crouch on
the backs of
elders.

Not far from where I trace
You in the dirt, ancestors
watch me, seeing
whether I will
pay respect or not.

I try by God I try to walk in a good way.

I breath, and You come to me:
clothed with hills that pleat round
your sacred sites; Your cheeks now
flush with generosity; Your
locks frame your strength.

And I breath again and then
remember this: we all share
Your breathing us and
that is Joy.

Yesterday our tree got a
a trim, only it isn’t really
our tree. It is actually our
elder, deeply rooted in
earth. Being closer to sun,
it beams. Scooping up wind,
it sings. Stretching across our lot,
it draws us in, only it really
isn’t our lot, our plot, our earth.
We belong to it, or so said
Chief Seattle, and I suspect
we would all do well to
trade “seize” for “see” and
be a bit more circumspect
at the prospect that we
own anything. We are
but a flicker across the
spectral vision of the divine
whose seeing us is the only reason
we have not yet slipped back into
the dust from whence tree imbibes life.

Yesterday, our tree got a trim.
Today, I touched its trunk and breathed.

I’m going after God,
not content with
God’s coming to me. I’ll
seize the divine
cloak – here in
oak, there in
wave slipping away
in wake of
canoe.

It won’t do
for me to sit
patiently like Job
did until he didn’t.
I’ll raise a fist to divinity
and a pint to mystery. I’ll
cheer the thunder
clap resounding as
lightning ferrets
out traces of
the divine.

I’ll look into her
eyes, rimmed with
hope and worry
both and I’ll see
God seeing me,
God coming
after
me.

This cloud is a
masterpiece. Wisps
of white stroking a blue
canvas, evoking

breath of mother on child’s cheek

slip of fish with current.

So gentle these clouds
that slowly grow
with time and travel until
one day they weep into life
or perhaps rage in violence.

From my vantage point
at tiller, I cannot but
stop breathing – for a time – as
this beauty evaporates
me. Now ascending into
this scene I become
what I see:

Your breath on my cheek

a silver streak in living water.

My social media feeds today include images of people winding their way down the 400, Ontario’s cottage country parking lot. My wife and I travelled down it on Saturday without a hitch, before folk began their trek back to Toronto after the long-weekend in Algonquin and environs.

We spent just shy of a week in Ontario’s near north heaven: three days with dear friends at their family cottage and then three days of canoe camping. The former was simply a joy, and the latter a marvel. Summer is certainly the time to set aside some projects in order to rejuvenate the soul and see again the wonder of God’s creation.

We canoe camped on three different lakes (Raven, Linda, and Owl), and were entertained at each by loons. Canadians love loons so much that we have put them on our one-dollar coin. But to see a loon and to hear a loon are two different things. I learned, many years ago, how to make a loon call but it really seems to hold no truck with loons. The real thing, or things, is a marvel with their varying calls with meanings that I can only guess at. I recently learned that smaller lakes usually host only one pair of loons. Raven and Owl were quite small, while Linda was a bit larger. When we would paddle about on all three lakes, they would often be in our vicinity. Every now and then one would dive down, and re-appear a few minutes later: popping up out of the water a dozen metres or so from the canoe. We were utterly transfixed by them.

I also learned recently, that loons eat some small rocks along with their diet of small fish, frogs, salamanders and other aquatic foodstuff. The rocks apparently help digestion, breaking down exoskeletons of certain dishes. I’m fairly certain that much could be done with this, metaphor-wise, but I think I want to sit with this for a bit. I do know, however, that the seeing and hearing of loons piqued my interest in them anew, and my fascination with the wonders of creation.

Luther was something of a creation theologian, speaking of the divine converse between nature and its Creator. In his estimation, we are not the sole inheritors of God’s interest, a point too easily forgotten in too many iterations of Christianity, and perhaps other religious traditions afflicted with modern obsessions with the self. But the simple loon reminded me again that the community of well-being that God imagines is so much bigger than me and mine. It includes all of creation, which functions as so much more than a stage for the divine drama. The loon and the lake, as much as the human enjoying them, are players in God’s playbook, and we ignore what my Indigenous friends call “all of my relations” at our loss and peril both. 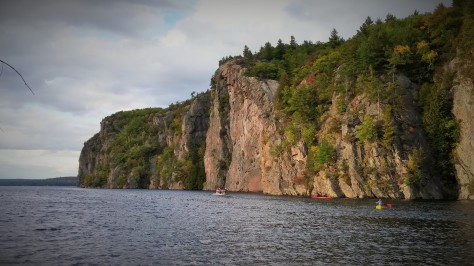 This last weekend was Thanksgiving in Canada.  For many this is a time to gather together around a roast turkey and pumpkin pie.  As we planned our Thanksgiving this time year, we realized that two of our three girls would be unable to join us, and so my wife Gwenanne pondered the possibility of meeting our middle daughter N for a camping weekend.  Gwenanne and I have never camped in the fall, and thought it might be fun.  N agreed and so we asked her where we might meet.  Algonquin Park is a favoured spot but was found to be full and so N suggested Bon Echo Park.

Bon Echo Provincial Park was unknown to me, but rather important for a couple of reasons, perhaps the most important being that the massive cliffs found at the narrows found in the middle of Mazinaw Lake served as the canvas for a massive number of pictographs, created by First Nations.  It is not overly surprising that these massive cliffs became the site of these ancient and mystical works of art: the cliffs are potent and the water pounding these rocks offers both access to them and protection for them.

The park was once the site of an inn, built first for retreat for the wealthy of Methodist persuasion until the Inn was purchased by Flora McDonald Denison, whose vision was to replicate in a Canadian context a place where the philosophy of Walt Witman could find a home.  Members of the Group of Seven also found a home here, who along with others, visited this site in their quest for Canadian artistic expression in the early 20th century.  The family ran the inn until the Great Depression, at which point it was leased until fire destroyed it in 1936.   Bon Echo was made a provincial park and opened in 1965, and still today park visitors come to be inspired, moved and quieted in much the same way that those First Nation and Group of Seven artists did.

On our last day there, we rented a canoe and paddled along the cliffs, taking in the many pictographs.  Knowing their provenance, and the fact that these pictographs were often painted in places deemed spiritually potent, I attended them with a sense of expectation, which was not disappointed.  I was also deeply moved as I looked up to see cliffs formed by massive geological events encoded in the diagonal press of rock from the horizontal of water splashing in song against these same cliffs.  Here and there, cragged trees pushed out of these cliffs, marbled with tales to be read by geologists with their long game wisdom.

I took a few photos of the park in our brief sojourn there.  As is usual, these woefully underrepresent the power of the place.  Yet, I hope to explore some of these paltry photos in painting on canvas in service of my soul as I discern how to echo the heavens “declaring the glory of the Lord and the firmament proclaiming his handiwork.” (Psalm 19:1)

It was, in fact, a most fitting way to spend a thanksgiving weekend, even if the turkey we ate was soup (lovingly prepared by my wife) and the pie we ate was forfeited for a pumpkin loaf (a first time attempt on my part).  The sun illumined trees iconically.  The wind spoke to my soul.  The ground opened up, here and there, and showed divine fingerprints on our walks while bonfires at night reminded us that life is gift, pure gift indeed, and we have every reason to be thankful people. 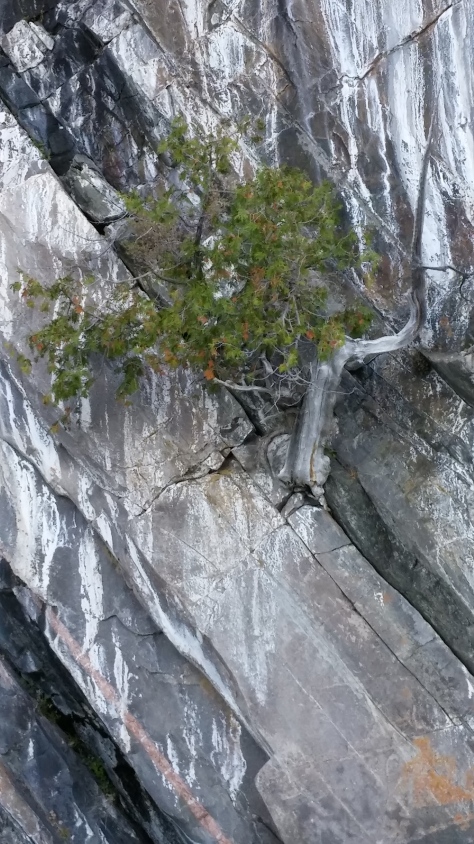